So, this is way past due, but here are some pictures from Terinati's and Adam's Mario Bros. themed party. Anna and I were a little rushed putting it together (two busy girls = difficult time making plans, etc.), but it turned out to be pretty fun! Well, it wasn't just us who helped. Saudi, Kyriel, and Miguel were also pretty helpful. :) 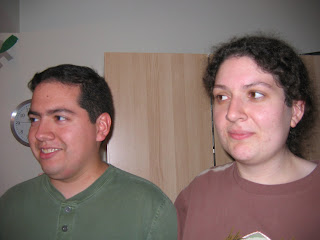 Kyriel and Miguel arrived early and helped us set up streamers. Aren't they cute next to one another? :) 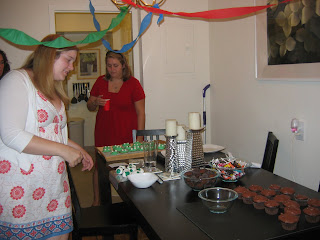 Anna spent a great deal of time in the kitchen making muffins, which were supposed to be the little evil mushrooms . . . but we didn't have much time to decorate them. :} 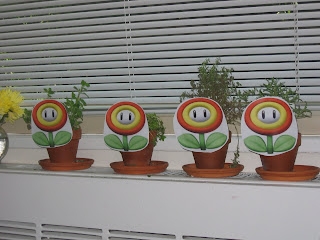 And, I spent time helping with other crafts, like cutting out these cute flowers and putting together the yellow chocolate coin boxes. :) 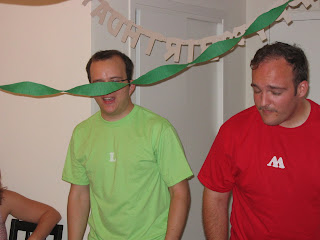 This isn't a great picture, but you can see that we got the boys to wear shirts! Voila! Mario and Luigi!

In other news, I haven't gotten to play with all the gifts I received yet (yesterday afternoon, I suffered so badly from an allergy attack that I ended up resting rather than doing homework, so I got up at 5:30am to finish one of my assignments and turn it in), but two major items that I'm probably going to use the heck out of are WiiFit, which I got from Terinati, and The Fitness Challenge game, which I got from my Dadoo! Amazingly enough, these two games will be able to work in unison! HA! I'm not putting it off a single day, either. I have already attached the Fitness Challenge to our refrigerator, and Jesse and I set up the game to play against one another. See? I'm orange player 1, and he's purple player 2: 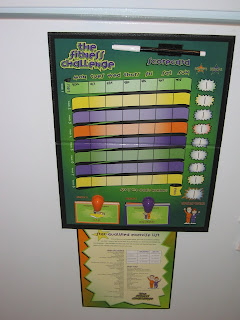 To summarize, this game lasts for 8 weeks, and Terinati and I will earn points for exercising individually. Each day, we put down points we earn. At the end of the week or at the end of the game, there is a wager book at the bottom of the board. In our case, each wager book is made up of 15 cards from the game. If I get 40 points by the end, Terinati will have to do everything in my wager book, and vice versa. Or, we can go weekly. At any rate, I have a feeling that with our competitive spirits, we'll probably tie. Or, Terinati may win, just because he has more free time. We'll see, though! Equipped with WiiFit, which gives me the change I needed in my routine, and also with Kyriel looking for a walking partner for her fitness regime, perhaps I will have a good chance! I'll keep you posted. Wish me luck! :o
Posted by Dream Senshi at 7:38 PM