Ren Faire and other Updates 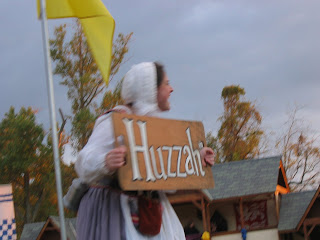 I have been remiss in my posting! But, to be fair, a lot has been going on. As you can see from the above shot, we finally got to the Ren Faire for the last weekend, Chivalry Weekend, to celebrate my birthday. Yes, a bit late, but it was the first day Terinati had off. The group included Kyriel, myself, Terinati, Anna, and Adam, and we actually stayed the entire day! :o But, that should tell you how fun it was! Huzzah!

I was relieved that the boys had as much fun as they did. There are many games at the Ren Faire, but usually they're the last thing I think about when I've gone in the past. In fact, I may not have even noticed them, really. :} I was always more interested in the shows and the shopping. But, watching Adam and Terinati play was really enjoyable. I really think they had a great time together. :) 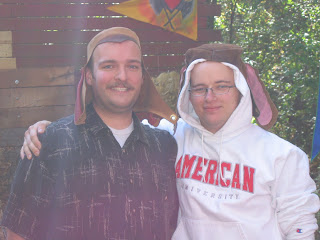 And yes, jesting is pretty normal at the ren faire. It's all very good-natured, and very contangeous. ;)

We visited many shops, had WAY too much to eat (turkey legs, funnel cake, pretzels, ice cream, cream puffs, nuts, etc.). Terinati and I met with a gypsy who was very nice, too! It was pretty cool.

Also, Terinati found a Ren Faire costume! They sure aren't cheap, but he looks awfully good in it, no? :) 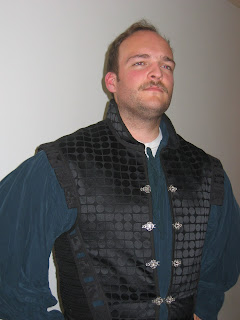 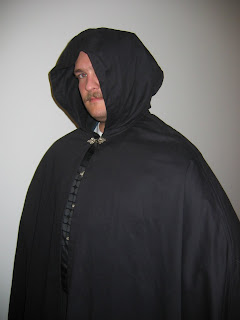 I got a new costume too, but I didn't wear it because it was COLD there and I didn't have a complete outfit with me, so I'll probably have pictures later after Halloween! ;) But, Kyriel did get a tail added to HER costume . . . 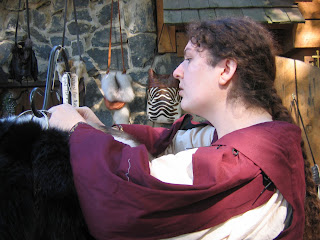 And, while I didn't wear a costume, I did have my face painted. Isn't it awesome?! I'm thinking of modifying it for the wedding! It's just sooooo pretty (and I'm not big on traditional makeup and I had this sort of vision in mind anyway). 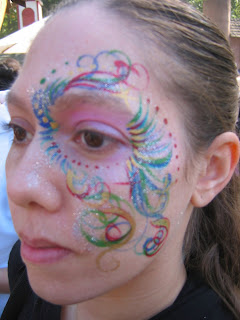 I was really sad to wash off such an intense design. Kudos to the artist!

We ended the day with the joust, where no one fell off their horses, although one guy got a javelin stuck in his shirt, and it looked like it really hurt. :o I hope he was okay! You can barely make it out in the second video right before it slides down.

That was such a fun day. It was one of those where you know it's good because you're sad you have to end it, but at the same time ending it sooner rather than later is really for the best.

The Fitness Challenge continues! I currently have 14 points to Terinati's 12, although I think I'll be gaining a bigger lead after this week. Thanks to joining Spark, it occurred to me that I could safely break up my workouts throughout the day, and that has been REALLY going well for me. Also, thanks to Professor Pinel (I LOVE YOUR BOOK!!! I AM YOUR NERDY FAN!!) , I've taken lunches out of my life. That's right! I only eat breakfast and dinner now, and drink water the rest of the day. Increasing the fasting period is easier on my body, and it makes it so much easier to resist evil temptations at work, like candy by the desk or pastries that get brought in. I'm eating healthier and feeling SOOO much better and am more energetic. And, I still eat the same sized dinners and breakfasts, so I'm not overeating as much as I used to either. It was a gradual process, but so far it's had success. I think the hardest part has been that everyone else I know still eats lunches, and I think some people worry that I have some kind of eating disorder (trust me, if you saw what I had for dinner most nights, you would NOT worry :} ) or feel awkward. * shrug * It's healthier for me and it's working, so I'm not changing it, though. :)

On Monday, I had an endoscopy. It was really a strange experience. Nothing shows you just how tense you are the rest of the time like being on anesthesia. Also, IVs hurt. I wasn't expecting that at all! I thought it'd be like getting a shot, but I still have a bruise from it and it was sore for two days after. Pulling my rollling backpack down the street on the first day after was really tough! On the other hand, the pictures are really cool and I'm saving them for any other biopsychology studies that I do.

So, yeah. That's part of why I've been so busy. I received another 4.0 in my Biopsychology class (it's really cool when your grades add up to be 99.xx%!), so huzzah! And now I'm learning Industrial/Organizational Psychology. I've already learned some interesting stuff about that, but wish me luck! But, for today, I need to focus on preparing for our Halloween party tomorrow evening! :o Wish me luck!
Posted by Dream Senshi at 3:57 AM 3 comments:

It's weird, but fall seemed to come on suddenly. It was really hot one day, and then the next it was COLD! We all kind of mocked it out here. "Oh, this again?" For the last couple of years, the weather has been very fickle. "Fall-spring, fall-spring, faaaaaaaallll, spring-WINTER!" (as Terinati put it) So, we thought, "Ha ha, it's cold today, but it will be warm again tomorrow." But, the warmth never came back and we've got lows in the 40's. eep! It's almost like the midwest all over again! I hope there won't be snow any time soon! My wardrobe is not prepared!

Last week I only got 2 points in the Fitness Challenge, while Terinati got 5. I had been given medication by one of my doctors to help with feeling sick, but then when I took it, I was MORE sick. It was so bad that I pretty much ended up taking the rest of the week to recover. That means I have 8 points total and Terinati is in the lead with 10! But, I feel better this week. So, I just need to get off my bum and work out!

Speaking of working out, my topic in my biopsychology class this week was about eating and diet. You know, I never even thought about how unnecessary three meals a day is. And, hunger? It's not your body saying, "Feed me!" It's actually your body saying, "Oh, great. This is about that time when the girl puts food in me and screws up my homeostasis. Okay, better prepare ourselves!" :O Of course, that doesn't mean anyone should just stop eating, but it's fascinating. I eat less than I did some years ago, but I found it hard to eat less because I believed in the set-point system where you need to maintain energy levels in your body. It's NOT TRUE! Your body will do just fine if you eat a little less. It just has to adjust, that's all. I think taking down intake gradually is the key. Not that I need to lose a lot of weight these days, but I do carry around a bit of jiggly fat. Some fat is good, but I don't think it could hurt to trim off a tiny bit more. At any rate, it was educational. Professor Pinel, you ROCK!! * snuggles her text book * I can't wait to read the sources he points to, too. If I ever have time. %} I still have to catch up on Harry Potter! :} At any rate, check it out! It's amazing how poor our nutrition education in school STILL is. Follow the science!

Anyway, that's all I've really got. It's a magical time of year and while I'm freaked out about getting things done for the wedding from time to time, life is good. The cats are happy and playful, and Kyriel and I are planning a Halloween party this year! YAY!!! I'm so excited! We recently got a free ice cream maker, and I'm determined to learn to make pumpkin ice cream with it. * grin * Oh, and we're heading to the Ren Faire for Chivalry Weekend, too! I hope that Terinati and I can find some cute (but cheap? please be cheap?? haha...) costumes there. Usually, if you run from store to store, you can piece together an outfit for a reasonable price. It's the whole outfits that are frightening to your wallet. Hopefully, we'll remember the camera and have photos to share. I can't wait!! I hope it won't be too cold... :o

I love Wii Fit still! The game continually finds way to keep the stimulation changing so that it's never the same exact thing every day, which is the problem I have with work out DVDs that I've gotten in the past. No matter how good they are, there just isn't enough to keep them from getting monotenous eventually.

As for the Fitness Challenge, I got 6 points last week and Terinati got 5 (that means I worked out 4 of the 7 days, and Jesse worked out 3). We're both sore, tired, and while it is fun, on the days when we're the most sore, it becomes evident that we shouldn't have pushed ourselves as hard. He suffers zombieism, which is a trait usually reserved for deep imersion into video games or very intensely interesting books, and I just plain get cranky with headaches and eye pain. :b So, I think we're taking it easy for a couple of days. :} I think it'll be good, and Wii Fit has demonstrated improvement in my balance and overall ability, which is exciting to see! I'll have to create some videos at some point to share the fun. :)

Meanwhile, we're getting more deeply immersed in wedding planning as the time draws nearer, and we're getting the invitations together so that we can mail them out. I just need to finish some art work, and then we'll really be set! And, setting up for the honeymoon in Japan is coming along too! I'm nervous about getting lost, but at the same time I think we'll be just fine. I think it's going to be very surreal for most of the time we're there, at least for me! Jesse's been to Nigeria, but the most foreign places I've been are Hawai'i (part of the U.S.!) and Canada. No matter how well you prepare (and I'm a little behind in my Japanese studies :( ), I think that immersing yourself in another culture, especially without guides (cut nearly $1000 of the cost out! YAY!), is probably always shocking in some way. Especially with the jet lag we may have on the first day. At least I'm already planning for it! MWA HA HA!

There's still a lot to be done, but I think we're doing alright . . . :} It's just nerve-wracking sometimes. I need more free time!

Ah well. Speaking of that, I have a cooking club session to prepare for tomorrow, and other stuff won't wait for me to finish this blog! :} Wish me luck!
Posted by Dream Senshi at 8:39 AM No comments: