So, I've been saying that I would update, with pictures, but the truth is things are so busy right now that I don't have time for the picture posting, so... meh. Sorry guys!

Anyway, so the result of the biopsy is that, in fact, Stardust has inflammatory bowel disease. :( I'm fairly certain chicken is fine, 'cause she had it for three years without getting sick and, duh, when we changed her diet, she did. Basically, it's like an allergy to common proteins. So, the vet says only novelty proteins for her!

To try and really get out there and be supportive, and get the canned Science Diet GONE since it's grosser than I ever realized (compared to their dry food, it's like sewer puke). So, I got this Whole Pet Diet book, intending to use it to the best of my ability to help both of my kitties into prime health. I learned a lot... including that Stardust hates anything home made.

We decided to go with duck, because novelty protein foods (venison, rabbit, etc.) are so rare and a little bit more pricy, so they have to be ordered. Duck is the only thing I can think of that you can get organic in a store. So, they happened to be out, and I spent an entire afternoon while sick (with Jesse's assistance) cooking for her, because I wanted her to get better ASAP. Guess what? She wouldn't eat it. $36 and probably a month's-worth of cat food down the drain. Jesse had fun wiggling its kidneys at me, if that's an upside. :b Duck kidneys are gross. They look like demon eyeballs.

Thankfully, the food came in soon enough, as did her medicine, and Stardust is ferocious once more! She plays, she spends time with me, but I think being sick sapped a bit of her. I feel bad . . . I wish I had known sooner what was wrong. It took since March to diagnose that problem! :( But, it's not as though I didn't take her to the vet the first time, insist something was wrong, only to be told to get her some mild medications and that she'd be fine. :b She was not fine. I wouldn't have taken her to the vet in the first place if I hadn't thought it was weird. Anyway, she's recovering.

Oh, and the Whole Pet Diet book? Still worth it! My kitties are both eating EFAs (which, incidentally, include the anti-inflammatory flaxseed oil! Yay!) and getting shinier, healthier coats.. I'm pretty sure that Tatsu has stopped shedding altogether! :)

Anyway, so that's the scoop. Sorry for being boring and not having pictures. Maybe later. 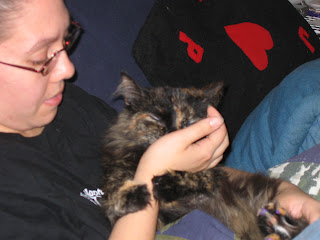 So, today Stardust was going to go inpatient to have her stricture fixed, get an endoscopy and ultrasound. The night before was like this picture. Stardust has been feeling better, but not all the way better, and she spends a lot of time letting me hold her and then grabbing my arm so that she can nuzzle it. Despite what the vets said today, she is very sweet. :}

It was hard to let her go. Terinati dropped me off at work, and I had to watch him drive off with my kitter-pea, just hoping nothing would go wrong.

You can imagine my delight when I called Jesse as work was ending and he said the specialists had advised we could pick her up! Hooray! But, it cost $1816.... OWWW... in addition to the $750 already spent. :( But, what else can you do for your best friend when they're sick and don't have their own funds? 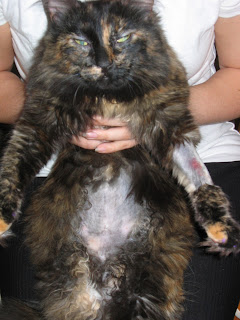 But, here was the kitty I got back, and the report that came with her: The endoscopy showed a normal esophagus! In about the same amount of time that it took for the stricture to occur, Stardust healed up again! Hooray! So, it's good it's not the esophagus itself. No evidence of stricture or inflammation in the esophagus. In the stomach, though, there were a few mild areas of inflammation/irritation noted, but very mild. However, the small intestines showed diffuse inflammation and irritation. So, as a result they ended up doing stomach and intestinal biopsies. !!! Sure, if they said, "Can we do this?" I would have said yes anyway. Money doesn't matter. Her little life does! Kitty lives are already short. I want hers to be as long and happy as possible!

Anyway, I was surprised to see the shaving, which I hadn't thought about but make sense in retrospect. And they wonder why she wasn't friendly with them. :b Duhhh?

Anyway, they are going to call us next week with the results of the biopsy. They suspect the cause of vomiting, which caused the stricture, may be inflammatory bowel disease. I'm not sure how to treat that, but since it's a listed disease, hopefully if that's what it is, they can treat it. * puffles * So much work! Stardust has been through a lot!

The worst part, though, is that in our excitement to take Stardust home early (she's still drunk and meowing at things for no reason and purring like she's got catnip shoved up her nostrils, while wobbling around mumbling like a crazy person, btw), we forgot her medicine at the specialist!! :( Terinati is going back tomorrow morning. Can I tell you how much I love this man for putting up with all of this trouble and listening to me remind him over and over again how to take care of her when I can't do it myself? She should be okay until then, but I still feel like an idiot. I reminded myself no less than three times on the way there. I guess 20 minutes waiting for your furr-baby to come out behind those closed doors does that to you, though. :}