To see all the pictures from the honeymoon as I upload them (the ones in my blog only skim the surface), check out: http://www.flickr.com/dreamsenshi

Today started very rough, as you could probably tell from my hectic post for Day 2 earlier. Walking all day yesterday had repercussions, even with working hard to stay hydrated and stretching. I was incredibly sore when I got up, as was Terinati, and as of now my right knee seems to have some problem. It hurts the most when I go downstairs, but in general it doesn't feel good; I'm trying my best to be careful with it.

After showering, I did feel a lot better, though my leg only got worse throughout the day. Since it was an eating day, I ate breakfast in the lobby for the first time, and it was great! There was bread, scrambled eggs, sausages, some kind of spiced rice triangle (delicious!), a potato salad with apples in it, and some kind of corn soup. It was all fantastic, and the morning was fun because it was crowded and a nice woman with two boys asked to sit next to us and complimented Terinati on his chop stick skills. :)

Our plan for today after that has been in the works for two years. Shortly after getting engaged and discussing the possibility of being able to save up enough money for Japan for our honeymoon, we did a search online for romantic locations. Enoshima came up in a few other blogs, and we immediately fell in love. Not only is it the island of the goddess Benten, who grants artistic ability as well as war ability and is prayed to specifically for love (they have Valentine's festivals there every year, with fireworks and everything!), but the island was described as being inhabited entirely with cats. We had a hard time finding a picture online without a kitty in it! Thus, we were inspired to name our website that we created a short while later "Kitty Island" after this cool place.

When we spoke to Inside Japan Tours, we insisted that this is one place we had to go, so today was the day! After three train trips to get there, we walked down Benten Bashi (Benten Bridge) toward Enoshima... 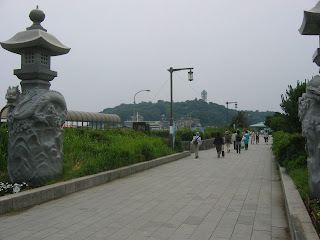 We had been planning to take the ferry to the island, but the ferry was not running today. :} Our poor feet had no idea what they were in for.

At the end of the bridge, it's just like any famous beach property; food, surfers, and a big crowd of people shopping. I'm glad we didn't opt to go swimming ourselves because there was some really gross garbage in the water, and I bet it was pretty cold despite it being summer.

A short while in, I inquired to Terinati about this elevator we could take to the top, but we discovered it cost money so we weren't going to take it. :( Sorry, knee! POORness. :/ So, we started the walk here and went all the way around the island to see everything. It took all day! 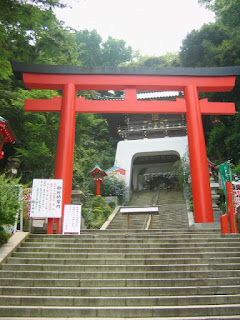 This was only the first of many stairs around the island. :} I had no idea how much there was to see! 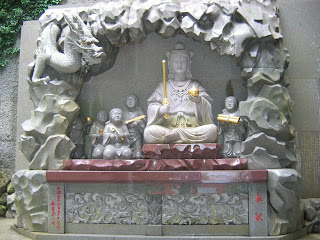 While this statue was impressive, with Benten and the Dragon god of prosperity, most people just walked right by it because it's nothing compared to everything else you would see. I still like it quite a bit, though! 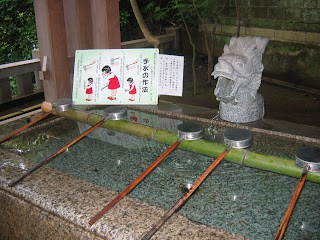 Just to the right of that is this washing basin. We were fortunate enough to see a Japanese couple come up and use it before we did so ourselves. Although we can't read to know for sure, we suepct that a person must be purified before approaching the shrines. 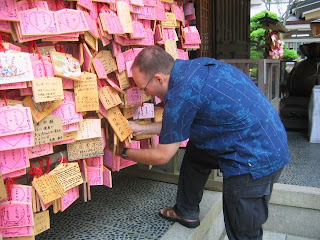 While there, we wrote our own prayer to Benten. I remembered how to write our names in Katakana! Go me! It was sweet to glance at the other cards (I was trying hard not to read them because those thoughts are personal and special, ne?), especially when we saw some with only one name and a question mark for their potential partner. Dreams of love are something magical, and I think people have to be special to believe in them, especially enough to write them down! 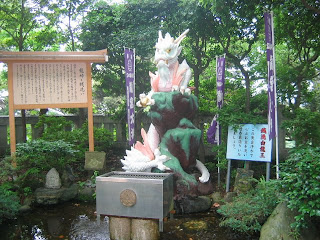 Next stop was to see the prosperity dragon god. Isn't he cool? 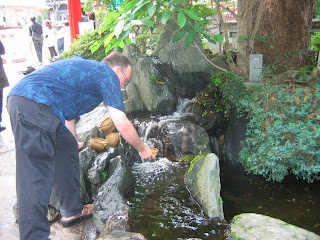 All around the dragon is this pool of water. I saw some men and women wash their money, even paper cash money, by placing it into a small bowl basket, like Terinati is doing in the above picture, and then getting it wet in the waters. I suspect this has to do with the dragon's water multiplying the amount that you wash. 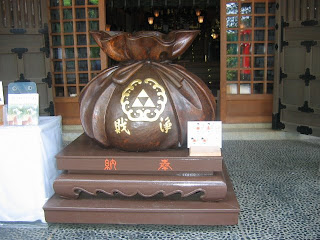 In the same area, we also discovered the triforce. :} What does it mean?! Why is it associated with safe driving? This blows my mind, in a Benten shrine. 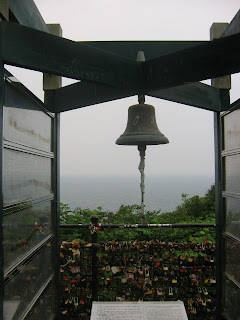 We also saw this bell, which is the Bell of Dragon's Love. I don't know the whole legend, but supposedly many people come to ring this bell and pray for their eternal love. Instead of using paper, most people brought locks to add to the rows you can see here. So, if you want to do something really different for your loved one and are going to be near enough Enoshima, I recommend taking your sweetie here. 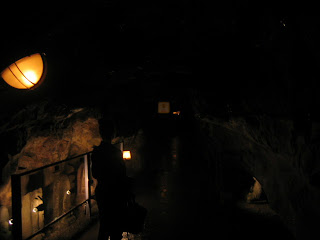 There were also historical caves which we were sent to explore using a birthday candle in little homemade sort of tray. The cave was really awesome! I'd have had no complaints, had I not been getting so sore that it was impossible not to wince when I walked downhill anymore.

Quite possibly one of the most enchanting moments that I just had to record a snippet of was this monk singing in the Enoshima Daishi. I wanted to buy a CD of it, but they seemed to have already sold out. :(
Time was certainly flying, especially after we got top of the lighthouse and took some pictures of the view. There was so much to see. It literally took us all day to get there, explore, and come back. But, was it worth it? Yes! I recommend the trip, but keep in mind, be prepared to pay if you can't handle the walk. 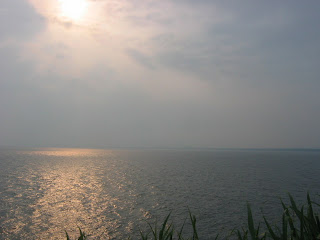 But wait! That's not all, right?! So, how many kitties did I see on Kitty Island? From the very moment I walked on it, I saw a cat (that one ran away from being photographed, though). In my photos, I counted 28 of them! I'll post a few of my favorites here: 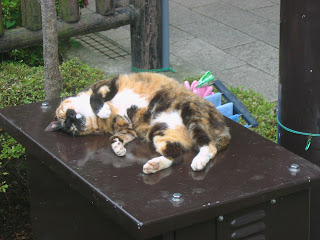 This kitty found a nice place to gather some sun in the garden. 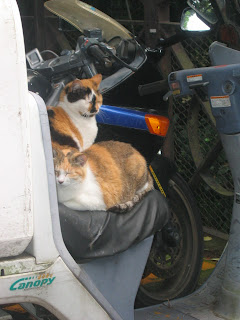 There were three kitties we found on motorcycles! 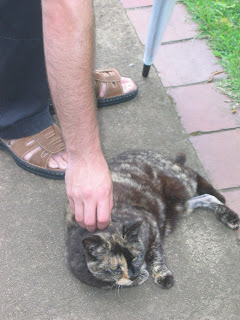 This kitty was grumpy about getting its picture taken at first, until Terinati started giving it scritches! 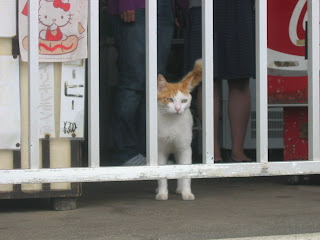 This kitty waltzed right into a restaurant where it was instantly greeted with affection and pets! I imagine that in America, this would not happen. Any cat wandering into a restaurant would be gotten rid of as soon as possible, because of possible germs and such. I'm fond of the fact that cats are treated so well in Japan. :) 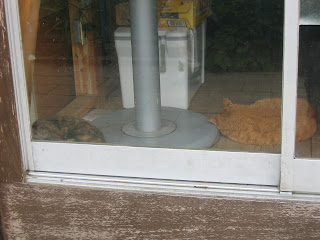 Two little kitties sleeping inside one of the buildings. Truly everywhere!

The way back was eventful, too. Terinati managed to get his photo taken with a Japanese police officer: 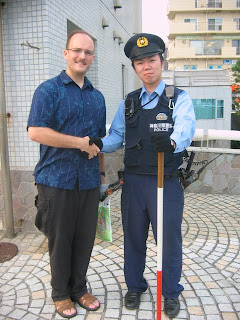 And, when we got back to the station, I noticed that someone had dressed the stone birds at the boundary of the station: 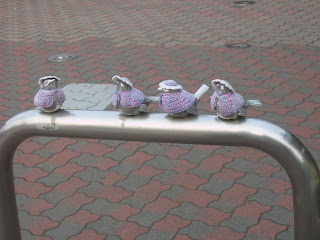 And, as a last good-bye to Benten, while riding the Japan Rail, we took a photo of a statue of her head that we could see through the window of the train. 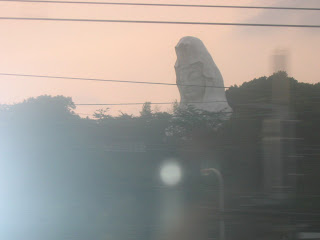 Upon the return to the hotel, we started a search for good food. We found an AWESOME place for relatively cheap (850 yen) on Edo Dori, with a green sign across the street from the McDonald's. I don't know the name of it, but you go inside and there is a machine with pictures of all of the meals you can have. You pay the machine, press the button for the meal, and get a ticket. You sit down and hand the ticket off to a helper, and in a moment you are brought raw food to cook yourself right in front of you! In my case, I didn't know how the food would end up, so I needed a little help preparing it. The woman working there was very eager to make sure the meal was a success! And, the best part? Once you're done you don't have to wait for the check! Since you paid already (oh, and not only do you get the food of your choice, but also a miso soup, salad, and water with a pitcher right next to you to refill), you just get up and walk out! I loved it. :) The food was delicious! The only problem was that my food, fried rice mixed with Korean rice, was so much that it really was too big of a serving for one person.

On the same street, we discovered something amusing: 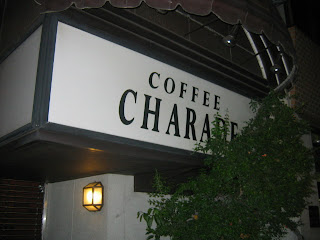 I have to wonder how Japanese folks choose their works. :} Is it magical coffee? Is it fake coffee? Why a charade? Ah well!

Finally, to end the day before coming home, I decided to pick up some McDonald's to go. Why, when I can have that any time in America? Because I just needed to know if it was different or not. For the most part, it ended up being the same. I think it may have been slightly different. The fries were the same, but they tasted like they were either cooked in less oil (which can be a store-to-store thing in America), or a different oil altogether. Hard to tell, so probably just less oil in that batch. The burger definitely was better only because I forgot to ask for no onions (I love onions, but McDonald's onions are disgusting), but ate it anyway and it tasted delicious! Yay! However, there were some cute differences on the menu, such as offering a Smile for 0 yen, and the items in the below picture: 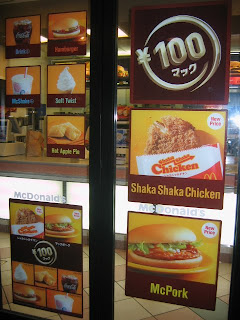 I've never heard of Shaka Shaka Chicken before, have you?

Anyway, I'm falling asleep at the computer as I type now, and Terinati and I are both starting to feel a little under the weather. I'm going to take a bath and head to bed! Oyasumi nasai!
Posted by Dream Senshi at 7:10 AM