The Rise of Modern Science - My New Class

I actually had some free time yesterday, which I made the mistake of using for sorting my L5R CCG deck . . . only to realize nearly three hours later that it was Sunday and I hadn't done my blog! But, I was tired and it was too late, so I'm doing it now. :}

With the end of my last course, Negotiation and Conflict Resolution, I thought for some silly reason I'd come into more time with which to write my music . . . The day after that class ended, I started my class for The Rise of Modern Science, which on average requires reading 5 or more chapters each week on top of working on a pretty serious opinion paper. =^oo^= I was not expecting that! Thankfully, other than Ch. 7, Brian L. Silver's writing in "The Ascent of Science" has been a delight to read, and that's helped. Unfortunately, that's still really time consuming and my back kind of feels funny from sitting how I do when I read; I need to start using a different posture if I'm going to keep up!

While initially panicking, I managed to not only catch up but pretty much make a new start toward getting ahead in my reading over the weekend! Hooray! :) So, perhaps I can get back on track with wedding stuff now. I've decided this week that I'm going to make a list (why didn't I put anything about the wedding down in my 101 goals, btw? Because I felt guilty doing it! Me = crazy) and make progress with something every single day. Even if it's the smallest bit of progress, I think I'll be feeling better about things in no time. Terinati and I have gotten so much taken care of, but there is still more to do and time is RUNNING OUT. AHHHH!

Oh, and speaking of time running out, we finished another two months and another game of Fitness Challenge! 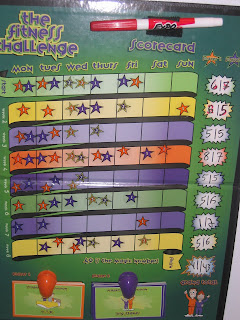 We worked really hard this month! I have to wonder, if I hadn't been sick, how many points would we have gotten?! As it was, Terinati won by 2 points, but since we both got over 40 (yay, us!) he can't give me a card. Ha! Had I been 2 points less, it would be a totally different story, so it's a good thing that I kept up! :} I'm really proud of him, though! Go Sweetie-kins! And, he definitely earned it. He had a goal weight to reach before the wedding (we're making a lifestyle choice here, though, so we're not going back once it's over... I don't really understand how anyone can), and he's met it! :D I've also almost met my goal, but I'm pretty happy with how I am too (which is probably what makes it hard to try that little bit harder to tone up :} ), so . . . huzzah!


That's what's been on my mind. Nothing exciting. Probably not even blog-worthy.

What has been exciting is that I've been trying to find my singing voice again, and I've been discovering interesting things about myself and how I sing, and that will help with composing my music, one of my wedding tasks for myself, so I'm really pleased with that. I've been have a magic time of just being me and enjoying the little things that I have with Terinati, Stardust, and Tatsu. It's sad to look at the recession going on, and yet I know that I've worked really hard to earn the lives we have, sacrificing a lot of myself in the process, so that sorrow is often lifted by the joy of knowing that we're more than okay. We're truly alive. We don't have lots of stuff. Heck, I get nervous just buying myself new clothes! And yet, life is so full . . . and there's still so much ahead of us! I can't imagine feeling luckier to be what we truly are together. * smile *

And, on that happy note, I will leave you to your Monday! Most people are sad to start their work week, but for me . . . I'm inexplicably happy! =^--^=

Time to follow up on the January Princess Challenge!

1.) Complete the master book of L5R rules and house rules for the RPG I’ve been working on and keep it up to date. (I actually may need to start over because of formatting issues, but we’ll see!) I’m calling it “World of Rokugan,” though the title may change with the new release of the Burning Sands core rules. It’s just a book for Terinati and I so that we can find things easier (and correct editing mishaps, though most of those have been fixed in the new edition! Thanks, AEG! :) )

03/02/09 - Terinati and I sat down and started creating categories and figuring out what sections will be moved where. Two hours spent on that! Go us!

4.) Get my BA in Psychology with a high GPA (already doing well there!).

6.) Learn Japanese (I don’t anticipate being fluent without living in the country, but I’d like to be able to get the gist of things, especially for reading and writing!).

Purchased the Remembering the Kanji I book!

19.) Catch up on the books that I’ve gotten from loved ones as opposed to only reading for school. Already started on this, but we’ll see if I can keep up!

23.) Make some time for Terinat’s games, like LOTRO. I think my first step is getting comfortable playing it by myself instead of just jumping in to everyone who’s really been into it all along, know the lore, etc. When I start something new, I need to take my time, read everything, and really get it for myself before I can enjoy it with someone else. Perhaps an hour a week is a decent starting point. (Heehee, I think most people probably set goals to play games less . . . I feel like Mr. Guder, here)

57.) I will look up words that I don’t know so long as I have access to some sort of dictionary. I don’t anticipate remembering them all, but I’m not satisfied with using context all of the time anymore. I’ve already learned that doing a word a day doesn’t help me.

03/08/09 - I resorted my deck for the first time in months. Trying Unicorn clan because I have no spells for my Phoenix shugenjas. None. Where are all the spell cards?!