A quick note before I get started: I have the picture from the end results of the Fitness Challenge now, so I wanted to post that real quick since I couldn't in the last blog! :) 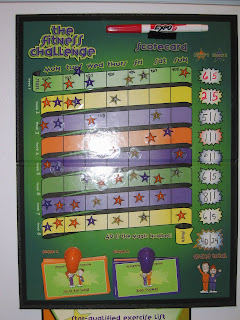 And, the card that Terinati drew was to feed the kitties for a week! Not the hardest thing in my stack of cards, but I nice reprieve for me since the kitties demand to be fed on time at 5am and 5:30pm respectively.

And, now for being on topic! ;)
So, I ran into the Princess Portal last month. It's funny, but it seems like whenever I'm trying to search for something, and I'm not sure really what it is, I find it. That website brought out a part of me I had sort of lost, but was nagging to get out. It was actually life-changing, which may seem shocking to some people. Sometimes we really do just need someone else to highlight something in ourselves in order to take steps in the right direction.

Anyway, excited in the discovery of Princess Skye's very cool website and happy about the changes I was making in my life (it's constantly changing, but this has been very good!), I decided to pursue my dream for a "club." I've had it since I was a little girl, and I think it all melded nicely with the whole bringing the MUSH back (still in the works... my poor computers...) and it having a purpose! So, I thought, "Princess Club! Neat idea!" And, it'd be easy to start out with something simple such as doing the princess challenges together. :)

So! The November Challenge was to go on an adventure somewhere in our Kingdom. Here's how it went! * sprinkles you with fairy dust and takes you to another time and place . . . *

Three princesses, who also happen to be in my wedding party, were invited to join me on an adventure to explore our Kingdom! But, what was near didn't really interest us. We've explored here a lot already! It's time to find something new! So, to the outskirts of the Kingdom it would be.

Princess Anna wanted to see an apple orchard. It's winter, but I thought that could be interesting. I investigated and found some places that would still be open and even selling items for Thanksgiving. I also found one that was near a zoo and a hiking trail. Princess Kyriel and Illuminique were both game, so we made plans! Princess Anna would drive her carriage and make sandwiches, I would make cookies and get drinks, and we would all pitch in for the feed for her horses. ;)

The night before, however, Princess Anna came down with an illness, so Princess Kyriel took up the reigns instead! I made petticoat tail shortbread cookies the night before and brought sweet, grape drinks. Meanwhile, Princess Illuminique, who is closer to the outskirts of our Kingdom, was oblivious to the problems Princess Anna was facing. :} That's okay, because it was probably past her bed time anyway.

Here are the petticoat tails, which turned out very yummy! I think, because of their ease of make and opportunity for pretty detail (the Princesses recommended to me to use colored sprinkles in the future, which is a great idea!), it will be my regular cookie for Princess activities. * smile * 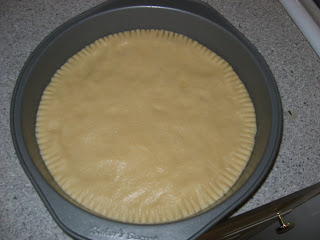 First, you make a shortbread dough, then you put it into a pan like so. I used a fork to make the fringe around the outside . . . 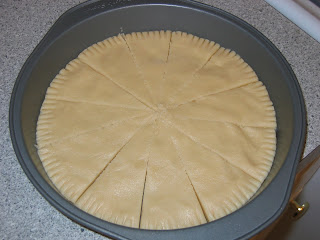 Then, you cut it into 12 equal pieces before baking. I'm really proud of this because I'm horrible with straight lines. :} And then, you bake! 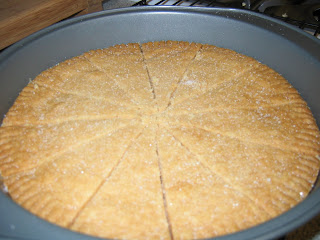 Once it's done, you reinforce the lines and sprinkle it with some sugar, if you like. Powdered sugar may have been more pretty... (oo, especially with little heart-shaped bits!!), but it would have been more messy too. I was worried it would be too tough, but it actually came out soooo good!

In the morning, I sparkled up (I have no pictures, but there are still sparkles in my hair and on my face today. I love sparkles, when done subtly, and it was the least I could do since I don't really have princess wear for winter yet), put on eyeshadow, and headed out! :D

The first stop on our fantastic adventure! An apple orchard! I haven't been to an apple orchard since I lived in Washington state, which is famous for its apples. The apple orchard I went to there specialized in only apples, so I didn't really know what to expect from this one. It turned out to be an awesome find that I hope to return to many times in the future! 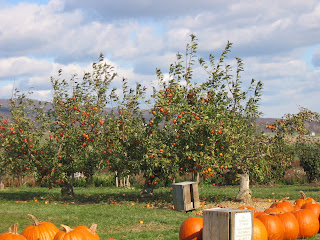 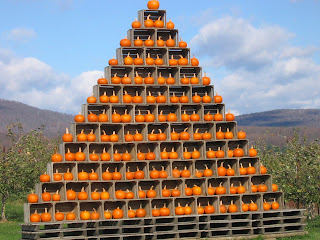 Despite it being winter, it was beautiful out, as you can see. The wind was chilly on our faces, but the orchard still had apples on the trees, fun decorations, and this interesting pyramid of pumpkins that I thought was pretty cute. 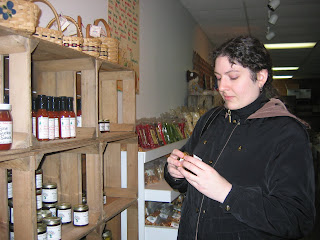 The main feature of the orchard was its shop. Once inside all three of us were overwhelmed with the great assortment of goods there was to find, not to mention the store's fantastic aroma! All three of us picked up some of their delicious apple cider (they had samples; it was like drinking fresh apples! YUM!), and I also purchased some things I thought would make the holiday brighter at home: Strawberry Rhubarb Fruit Spread (something I've missed since we moved away from Wisconsin), Pickled Beet Balls (I LOVE pickled beets!!), a Banana Nut Bread scented candle, and a box of spices for making your own hot mulled cider or spiced wine! Since my castle is very small, I was really happy because I felt these things would make it feel more homey for the holidays and release some of the tension I've been having.

After shopping, we explored the orchard some more and found a pretty gazebo, some kids toys, and then an Apple Castle!! :D heehee! I climbed to the top, even though it was small and hard to get up there. 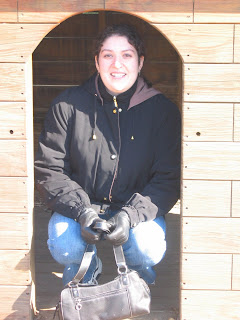 Here is Princess Kyriel in the doorway of the Apple Castle . . . 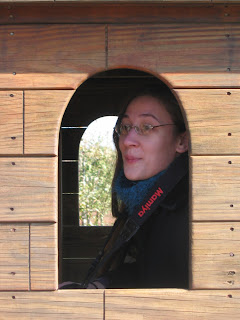 And the fair, Princess Illuminique looking out one of the Apple Castle's many windows with a regal expression. heehee. It was so fun there! 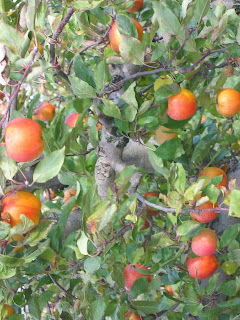 After taking one last look at the lovely apples on the trees (were those the Pink Ladies?), we headed on our way to the next destination on our Princess Adventure!

Not too far away was a zoo. We rode down to it, and there were a few cars parked there. But, when we came up to the building, the store sign said they were closed! :( Princess Illuminique tried the door, even though it was dark, and it opened!! :O Curiously, I boldly went inside and said, "Hello? Hello??" But, no one was there. We looked around the gift shop and were glad that we were all honest people, because no one WAS there and someone could easily steal the things in their shop! :( So, no safari ride, and no souvenirs to bring from that trip since there was no one to sell us anything, but we got to be in a store when it was closed, and that was exciting for the few minutes we were in there, at least. :} We called and confirmed that the zoo was indeed closed, even though staff was obviously around somewhere. Apparently, while it was not too cold out for humans, it was too cold out for the animals, so we continued our merry way to the next destination . . .

There was supposed to be a waterfall and some other sites to see, but the park was mostly closed for the winter. I wasn't expecting a whole lot, actually. I thought we would have lunch there, in the carriage (because it was so cold outside of it!) and then probably leave. However, we made another great find! The most amazing adventure!! 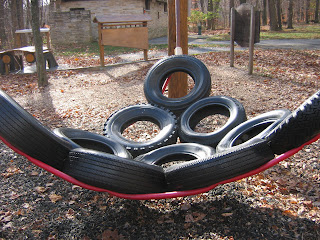 As we traveled through the woods on the paths, we came across this strange . . . thing? I bounced on it several times, challenging the fear of falling, and discovered that my many exercises to improve my balance have been working well for me! heehee. 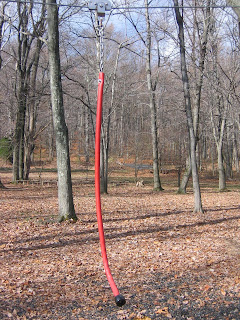 Kyriel discovered this zip line . . . But, where does it lead? One by one, we traveled down the zip line, bravely, to discover what lay at the end . . . 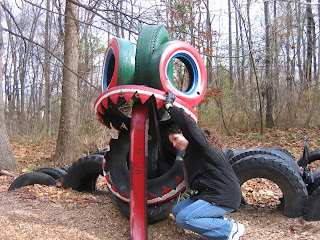 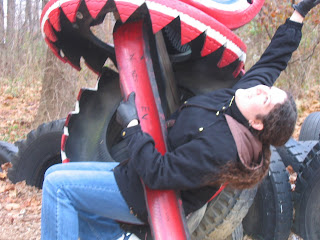 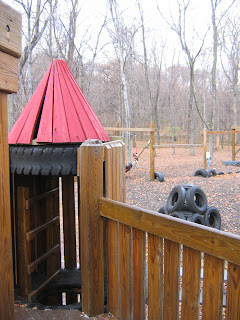 After escaping the dragon and heading down a trecherous trail of traps that tested our physical skills, I climbed to the top of this tower of another castle we found, overlooking the site. Indeed, the dragon seemed to have lost interest in us. ;) 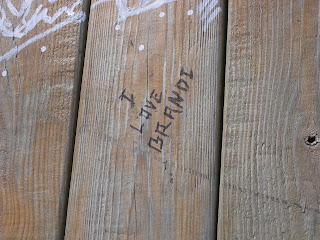 At the very top of the tower, I found this marking. I always wonder when I see things written like this . . . Does whoever wrote it still love that person? How in love were they? Did this writing have a significant meaning in their life and relationship? Was it an expression of unreturned love? So many stories behind the writing left behind that I discovered. In fact, one tree that we found in the park had writing on it dated from 1974, and from the looks of the tree and how the writing had widened like a tattoo on an aged woman, it probably really was that old! Wow . . . Did they know Princesses would come to read their tales over 40 years hence? ;) 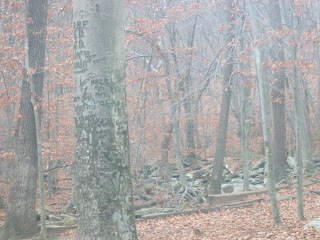 And here is where we sat, by a creek (it's almost impossible to see in the photo), to eat the sandwiches Princess Kyriel made with cookies and sweet grape drink from Japan. Yum. It was a great way to end the adventure before returning home, sitting, talking, and relaxing as we looked out into the trees. It was something quite beautiful. All of the leaves were the same, pretty pale color as far as the eye could see. As Kyriel pointed out, you could see so many trees because of the leaves being mostly on the ground, and then in the distance where the trees get thicker it looks like a wall of trees. It was enchanting, and I hope we get to go back there someday when it's warmer. Perhaps we will encounter the fierce dragon again! Dun dun DUN!

Well, I need to run now and get ready for some regularly scheduled maintenance. I'm still happy and daydreaming about yesterday and all of the great stuff we found, and I'm REALLY looking forward to whatever challenge comes up next month that we'll hopefully all be able to share. Blog again soon, unless the time beast comes after me once more. Sayonara!
Posted by Dream Senshi at 6:51 PM

New comments are not allowed.