So, I have a lot of catching up to do, and there won't be time next weekend either, so... I'm cramming it in RIGHT NOW. :} lol. 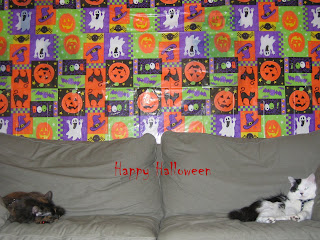 So, yes, the Halloween Party. I definitely couldn't have done it alone. Kyriel and I did it together, though I think she was definitely more in charge than I was, even though it was at my apartment. I just wanted it to be fun, but she was the mastermind behind the activities, including goodies to eat and movies to watch (like a Garfield Halloween special and "Hocus Pocus," a definite Halloween classic). Anna also contributed goodies, and we all had a good time. Somehow, Saudi managed to not get in our pictures, but he was there, I assure you.
First, pretty much everyone pitched in with decorating . . . and had way too much fun doing it. 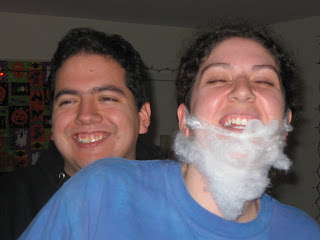 While I don't think the food I made turned out as good as at the Overnight Ninja Party (I should have listed to Kyriel when she told me the Thai Fish Sauce smelt bad; it normally smells bad, but it was REALLY funky, methinks... or maybe I was just expecting something different from my rats on a stick... ah well), but the other contributions, like Anna's cupcakes, were fantastic! So, go everyone else! Just goes to show that when I don't have time, I'm not such a great hostess. :} Lesson learned. But, look how delicious it was anyhow! :) 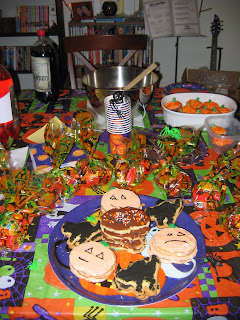 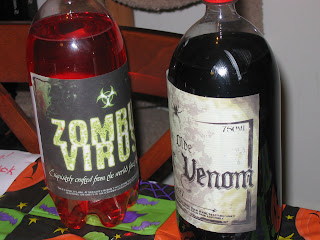 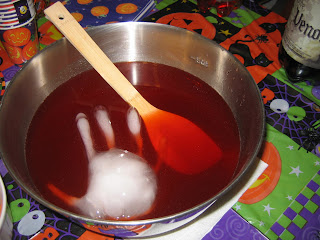 The punch in the last shot was a recipe we found online, with a hand made of ice. It came out pretty cool and SOOO tasty, despite how gross it sounds. We had to substitute one of the Koolaid packet flavors, but I think it ended up better than it would have been. The original recipe was to make the punch look black, but ours came out blood red! Definitely a keeper, that one! We still have an extra frozen hand in the freezer, though... :}

Oh! Oh! And, you musn't forget the costumes!! 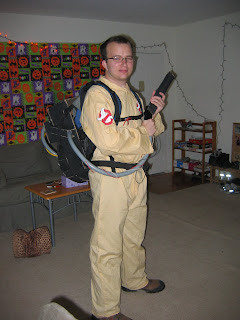 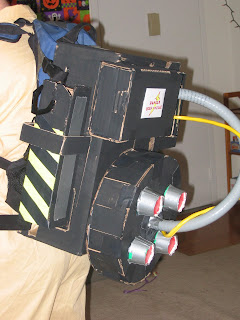 As you can see, Adam was a ghostbuster, as was Saudi. 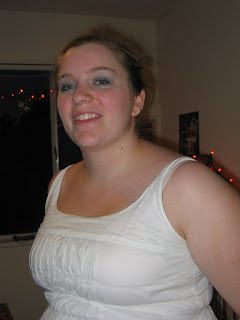 Sadly, the snakes in her hair didn't show up in this picture, but Anna was Medusa! 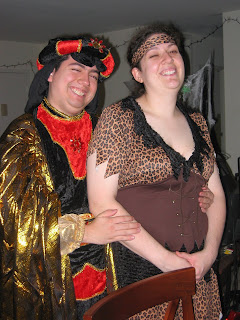 And here is the Sultan Miguel and his lovely... cave woman, er, Kyriel. :} heehee. It looks cheesy, but they really are that ridiculously happy when I see them together. Isn't it cute? :) 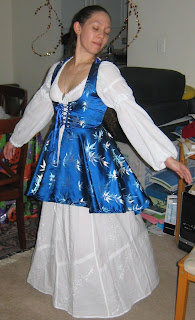 Oh yeah! And here's me in the outfit I put together at the Ren Faire and at the local mall (the skirt part) with Kyriel's help!

So, that was Halloween! Wish I could say more about it, but... I am pressed for time, curse it!

That being said, moving on!

On November 2nd, I celebrated one of my work-friends, Temple, at a surprise masquerade birthday with an under the water theme (she loves sharks!). So, here are some tidbits from that! It was really sweet. She was so loved, and I just always feel so many warm fuzzies when I see something like that, with people coming together for someone they care deeply about. 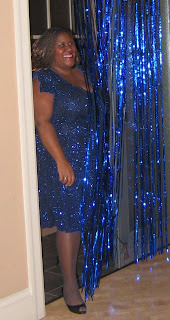 Here is the lady of honor as she arrived, sparkling like a jem of the sea! :) 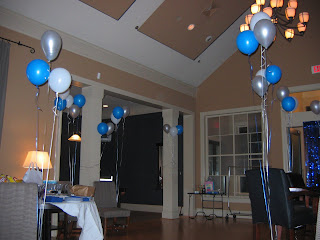 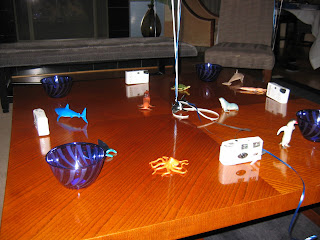 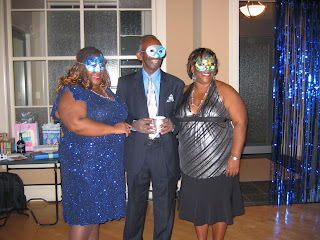 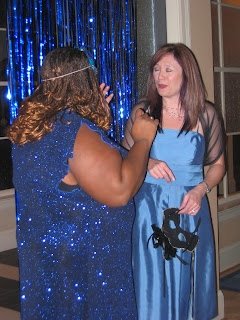 And then here she is being surprised with her best friend having been flown in!! :D

I also did take several videos of her opening presents, but it was too dark so they didn't come out well. So, instead, I'll share with you this cute picture of her holding up one of her gifts! ;) 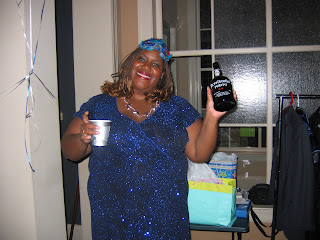 And now, I am only remiss in e-mailing folks pictures, which will just have to wait until tomorrow.

QUICKLY! Technical updates! So, troubles with both of the computer towers I tried to install stuff on today to run the MUSH separately from my own personal computer. GAHH! We have the monitor, and things are SOOO close to being done. In fact, I had everything installed and when I tried to log in remotely is when the server computer crashed and said that the hard drive is borked. It hasn't been used in well over five years, so I'm not entirely surprised. I'm not giving up, though! Perhaps I can fix the other, more reliable computer that was having issues. * PUFF * It's very frustrating to be so close and yet so far. I'll keep you posted.

Also, you'll notice on the right-hand side that I've started using Twitter. It's easier than blogging, for the most part, and just kind of fun. :) Even if no one watches it, it at least allows me to acknowledge that I'm living all of the freaking time. :} heh.

FINALLY, the results of the Fitness Challenge. That's right, it's been TWO MONTHS! I got down to 128 pounds in this time, too, which is pretty happy for me. I still have a ways to go (us short girls have to work harder!), but I'm very happy with my progress and that it was gradual, how I planned it.

Without further ado, here is the score board!

I was going to be cool and post the picture here, but the card wouldn't read for a second time for some odd reason... I guess it felt left out with everything else that wasn't functioning properly today. :} Anyway, I'm pretty shocked by that! I mean, Terinati works very hard. We both got sick for a while too, so that hit us hard. I think if we hadn't gotten sick, we would have both had more points. Ultimately, I squeezed in more time by getting up earlier, which really wasn't an option for Terinati because of his crazy work schedule. But, I win! And, just to be nice, rather than give him the entire packet like they suggest in the game, I'm going to have him draw just one card. What it will be? I don't know yet. I'll post that later, 'cause, speaking of sleep... I need to get some! :o

Anyway, wish me luck! This week promises to be another crazy ride. * sighs * I hope I can get the server working, but I imagine for now I'll be running it the usual way off my own computer. Bleh.

Take care, Everyone!
Posted by Dream Senshi at 7:53 PM