This week was pretty eventful for me, and in ways that I can't expound on in great detail, but I will do my best!

First, this Monday marked the end of another 2-month fitness challenge game with Terinati and I. 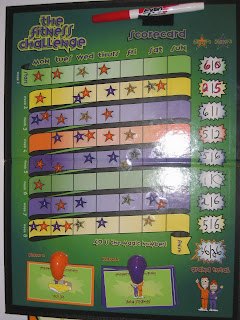 I won again! 36 to 26 points!
Terinati then drew a card and was responsible for getting the ceiling fan in the dining room fixed, which has been waiting for 4 months since we started the first game. :} It does this thing where it rattles sometimes and the glass is broken around one of the bulbs, which can't be safe with the rattling. I'm worried that one day it will rattle hard enough that the glass will just fall out on whoever is beneath it, so it's good that that will get taken care of!

We're off to a competitive start this week, though, as Terinati has been more steady with his work outs. I'm really proud of him! Keep it up, Sweetie! :)

The second main event was actually at my workplace. I don't talk about it much because it would be kind of unethical. This week was rough, though, because we lost our receptionist. I can't go into detail about the circumstances and everything that occurred as a result to that, but it was very stressful. I'm the only person in the building who has been the receptionist, so I'm kind of the only person who knows the job at all other than what our boss has gone through and been made aware of. That meant I was picking up the slack at work, so I've been kind of mentaly exhausted this week. At the same time, I think this is a sign we're heading into a new era, and I'm excited to see where that will lead us all. Hopefully, it will be a new a good era for the previous receptionist as well.

As I promised myself, though, I gave myself time to relax, guilt-free. Some of my favorite moments this week were spent watching Joan of Arcadia on DVD with Terinati and Stardust. It was one of those happy, family moments that were precious. Thanks to Terinati for taking these pictures of us together! 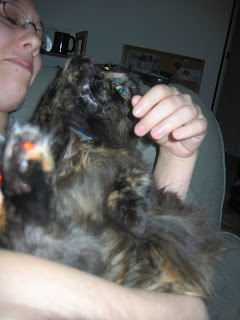 See? Those vet assistants were wrong! Look how cute she can be! ;) 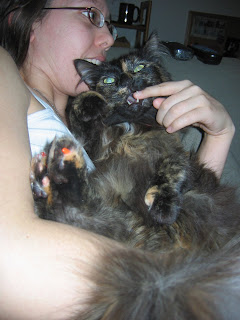 heehee. Yep, we're biting on each other. Just love bites, though. I'm so glad she's recovered so well. I love that crazy furrball. =^--^= When I'm with her like this, it's hard to remember that was ever such a terror when I first got her. Just goes to show what faith and a lot of love can do over time. 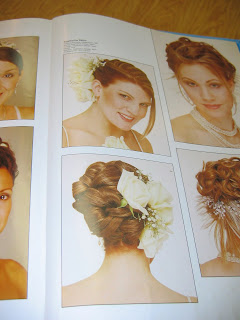 Finally, yesterday my Maid of Honor, Kyriel, and my flower girl, Anna, went out to do some wedding business. We found a stylist at the salon that Anna uses, and I'm really feeling good about things now because I know the approximate cost and they seem very flexible, helpful, and considerate. I haven't been to a salon for over a decade, but every time I went it seemed that the stylists there were more interested in doing what they wanted than caring if I liked it. :} It was definitely a good experience yesterday! Plus, they have a florist just up the street from them, so they can handle ordering flowers for my hair if I go in that direction. YAY! One less thing for me to have to coordinate. Go them! 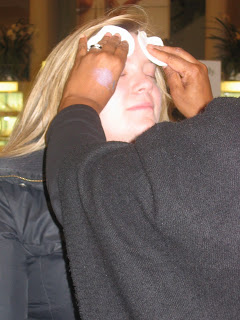 Next stop, makeover!
Since it didn't take as long at the salon as we'd thought it would, we figured we'd continue the girly search and try to find makeup. So, we all three had makeovers done at a mall.

Although I was assured that I was pretty, on the way home I thought to myself, I can't touch my face. I don't want to get makeup on Terinati. This is really uncomfortable.

When I saw Terinati's expression upon arriving home, it confirmed for me what I don't want to do for the wedding. I don't think I'm going to go with traditional makeup for sure. Secondly, I don't think I trust anyone else to do my face anymore. :} The woman was great, nice, friendly, and honest, but . . . AHHH!! Even though she was great at finding colors I thought were acceptable, Terinat's instant assessment that I should be on stage was accurate. I think if I do my own, it can be more subtle. It's just going to take practice.

Furthermore, that's not something I want to subject myself to on the wedding day. Worrying about getting makeup on other people or my dress or something silly like that . . . No way! My day is going to be fun and free of unnecessary stress. Seriously, I like the way I look even more now that I've reminded myself of how ridiculous trying to look different is. Perhaps some highlights for fun, like eyeshadow or sparkles or something, but keeping it simple on an otherwise big day is okay with me! :) It's a relief to have this relevation now rather than later, for sure. What's really important is who I perceive myself to be. 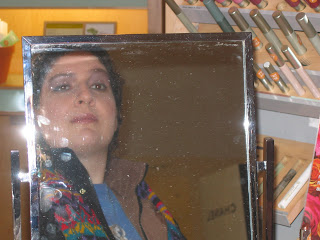 And now, on to my regular update of my goals!

9.) Find as much stuff to unlock in Wii Fit and My Fitness Coach as possible (I’ll warn of any spoilers when I post about this in the future, because Ireally don’t like having things spoiled for me).

10.) Exercise regularly. I don’t like scheduling it on M, W, F or anything like that, but as long as I do it 3 or more times a week, I think that’s good. Monotony of using the same days every week makes me just plain not want to do it (one of the problems I have with My Fitness Coach).

Figured out that working out on Sunday and blogging weekly on that day are not compatible goals; both too time consuming. Therefore, Sunday is not an exercise day. I'm going to try to work out every other day of the week however, with Saturday being optional depending on how I feel. Light/easy workouts on Tuesday and Thursday, Friday is definitely My Fitness Coach day, and Wii Fit or My Fitness Coach on Monday and Wendesday, depending on my mood. It's better to have a routine that I do almost every day rather than one I can flake out on. Other than getting sick one day of the week, this worked perfectly.

11.) Make time for relaxation, even if I don’t think that I have it. A couple hours each evening. I’m too afraid of being lazy, and I need to let that go because otherwise I have regular mental breakdowns, and that just can’t be healthy.

I was feeling pressured about a school assignment I wanted to get further ahead on, but I realized I was getting stressed and took time to give myself a facial, sit in a bubble bath, and chill out while listening to music and letting my incense give a soothing aroma.

20.) Get outside of my shell and adventure more, saying yes more often to going out with friends to places I’ve never been to before (The November Princess Adventure, going out and getting manicures and pedicures with Anna, and heading to New York for the first time on 01/03 are examples of me heading in this direction already).

23.) Make some time for Terinat’s games, like LOTRO. I think my first step is getting comfortable playing it by myself instead of just jumping in to everyone who’s really been into it all along, know the lore, etc. When I start something new, I need to take my time, read everything, and really get it for myself before I can enjoy it with someone else. Perhaps an hour a week is a decent starting point. (Heehee, I think most people probably set goals to play games less . . . I feel like Mr. Guder, here)

32.) Learn to wear makeup. I don’t like wearing makeup most of the time (I really enjoy natural beauty, and I just don’t buy that it is healthy to wear it), but sometimes it’s desired and I want to do better with that.

33.) Stock makeup that I like and works for me.

Purchased a powder foundation (probably won't use except for really particular situations), blush, and a brush. dun dun DUN.

53.) Be more green. I’ve worked hard on this in the past year, both at work and at home, but I can do more, and it’ll help with reducing clutter. (lol, I’ll defy gravity!)

01/13/09 - before printing out invoices for reconcilation, making sure that they're actually for the account I handle. Many sheets have been wasted due to people just sending me random documents. :} No more! (Good thing to, because the very first e-mail I opened was one I already had completed a month ago)

57.) I will look up words that I don’t know so long as I have access to some sort of dictionary. I don’t anticipate remembering them all, but I’m not satisfied with using context all of the time anymore. I’ve already learned that doing a word a day doesn’t help me.

–noun the branch of medicine dealing with the incidence and prevalence of disease in large populations and with detection of the source and cause of epidemics of infectious disease.

That last one was obvious in retrospect, but the context sure didn't point in that direction!

Also realized I could just link the definitions and it'd be less space-consuming.

58.) Do more logic puzzles or hemi-sync exercises to work out my brain. Just as important as the body!

I did over ten logic puzzles this week! It was fun to get back into it.

68.) I will work with Rainshine on making the mix CD!

01/13/09 - posted on the forum with Rainshine about the mix CD we're working on making with others. Established some goals (.wav file quality, who is printing labels, sending in pics, ideas for a name, poking Terinati & Kyriel to join us).

71.) They say that meeting our goals is a reward unto itself. However, I also know that positive reinforcement is important for our relationships with ourselves because we tend to be harder on ourselves than anyone else could ever be. In order to stop the “I suck” voice, I will implement a reward system for completing my goals (the small ones on the path to larger ones and the larger ones).

01/13/09 Although it is advised against to have conflicting goals, especially with rewards, I don't know any ways to reward myself that don't involve spending money. So, that conflict will just have to be. I'm learning about charm bracelets and I've started a wish list on the charmfactory.com website. With permission from Terinati, I'll purchase a monthly charm that will symbolize my progress. Actually, the initial chain and split rings are the most expensive part. The charms themselves are pretty cheap. The charm necklace I've picked out (I really hate having things on my wrists for long periods of time, and I want this to be with me to remind me of my accomplishments) is 18" in length, so I think it'll be good for a long time to come as well. I've never done a charm bracelet/necklace before, but I think it will be cool. Some months may merit more than one charm award, but my goal is to do enough that I can earn one charm a month. :)