This year has been really busy and expensive for us. The closer it gets to our wedding date, the more crazy everything feels. It was my first year back in college as well, while working full time, and it's gotten so hectic that Terinati and I actually miss each other, even with living together. But, at the same time, it's been a GREAT year, and I have a lot to be thankful for, and consequently we wanted to give more.

I'm thankful for my friends, which I feel like I've come to understand more this year. It's difficult to understand people, and a lot of the time I think most people allow intrapersonal conflict to ruin otherwise good relationships (you know, the "what ifs" in our heads and the attempts to reason why a person is the way they are without actually talking to them about it), so I don't take my friends opening up to me or spending more time with me for granted. Especially since we're not the only busy ones! So, yay! Friends! Family! Cats are healthy! Life is pretty good. :)

I like creating for others with my hands something that they can enjoy. I'm not great at a whole lot, but over the past few years I've gotten pretty good at baking. :) YAY! I'm even so confident in my own ability now that I have parts of recipes memorized and am getting excited about trying to create my own new things or rediscover lost recipes by combining other items together. This is what I baked this year to send out to my family, friends, and co-workers: 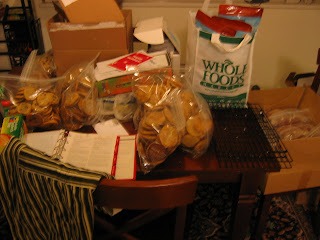 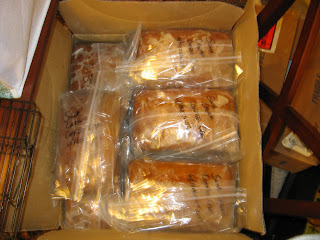 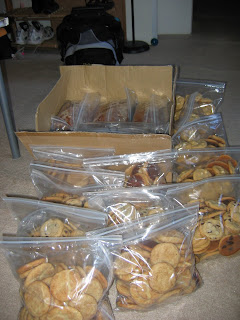 And then later, I baked more. I LOVED IT! It feels good to work that hard for people you care about, imagining their smiling faces, and smelling like cookies isn't a bad thing either. ;) I'm convinced, baked goods could save the world. I will have to learn more vegan recipes, though. But, it was amazing how happy it made so many people. It made days that would have been otherwise busy and grueling considerably brighter for some. If I had the proper equipment, I might just consider dropping everything and going into business baking, I loved the feeling so much, but that's REALLY not practical right now, and especially not out here. Still, it was so totally worth it. YAY!

But, I couldn't have done it alone. Terinati was a HUGE help. If it weren't for him, it might've been a bit more stressful for me. He ran and picked up extra goods (we ran out of flour again this week) whenever I needed them, dropping whatever he was doing, and he gave me his hands since I didn't have enough of my own and worked as my extended me for the hardest parts. He also let me blast my music so that I could sing as I bake (it's a must; that's how I do it. I'm convinced it makes the cookies happier), even though I'm sure it was probably annoying him and breaking the LOTRO mood. Thank you, Sweetie!

I guess I never thought about how creative I like to be around the holidays before, but I've come to consider it a normal, yearly event for me to create some kind of present-creature, too. This year had only one feature creature, even though I made a couple. I didn't do this all of my life, though. With the burst of the Information Age, there came a lot of items that are really obvious when gifted. CDs, console games, etc. You look at it, and you know at least what type of item that is. I, however, prefer to be surprised. My parents always found really cool ways to surprise me, but I'm not good at gift-wrapping, and there's only so many places you can hide gifts in a one-bedroom apartment (though, I think I'm pretty good at hiding them... mwa ha ha!). So, I had to come up with my own way. I guess it's not a surprise that it came out silly and (hopefully) cute. :) So, here is what I came up with this year! This is one of Terinati's gifts. I take surprising him very seriously, because he's very intelligent, hard to fool, and has this annoying habit of inspecting gifts too closely. So, this year I dug out EVERY single holiday/birthday item we had, and I found this red balloon. I had a brilliant idea to cut off the top, fill it full of fluff and the gift, and reattach the top and put a ribbon on it. There is a weight in the bottom (though, I still didn't master getting it to stand up by itself, so it does have to lean on something else), but it came out great because it looks like a giant ornament! YEAH! I'm pretty proud of it, though it does need some work. A regularly-priced wrapping job that didn't take too much time, but came out well. You can click on the image to see a bigger version of it. :) Hopefully, Terinati has no clue what it is. :o 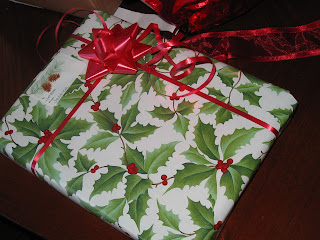 This is another one for Terinati. I bet you can't even tell what it's hiding. That's the idea. ;) Don't you hate nested gifts... ;) Actually, this one is good because the two, individually wrapped gifts inside it are related. 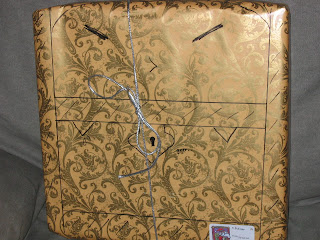 This gift was for our friend Adam. We saw this math clock on ThinkGeek, and Adam works at his college doing math stuff and loves math, so as soon as we saw it we were like, "OMG! We must get it for him!" But, a box was too boring so I turned it into a mimic. It kind of honors the first holiday creature I made, which was a nested mimic (Guitar Hero for Terinati a couple years back). 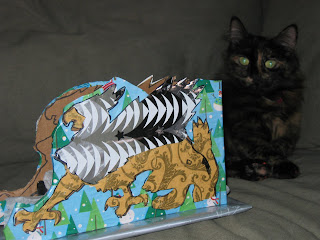 This year, I made the featured present-creature for my dear friend, Kyriel. She moved out here this year, lived with us, and Terinati and I really do think of her as family. Since her boyfriend is off traveling with his family for the holidays, I wanted to make the time she spent with us in lieu of him even more special. Plus, her gifts were difficult to disguise. I came up with the idea of a gryphon-sled. 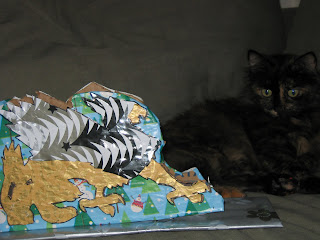 On the base is white wrapping paper with snowy flowers on it. I used slits in the base and plastic knives (cut so that the small tips attached to the front of the cardboard gryphon and the longer part to the back; you can see the relative size as compared to my 12-pound friend there, Stardust). 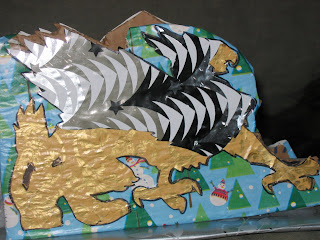 The gryphon itself was the longest part, taking a series of days. First, I printed out a picture I had of a gryphon, then cut it out, used the outline to draw on pieces of cardboard, cut them out, and the pieced together different wrapping paper with glue to form the pretty outside. I wish the inside was prettier and now, having more experience, would have done some things differently. Still, I hope she likes it and keeps it around as a holiday decoration thingy for years to come. :) But, if she doesn't, hopefully she'll at least enjoy it this year! The pictures really don't do it justice; much cooler in person.

Kyriel has been the best friend a girl could ask for. I appreciate her honesty and that we can accept our differences without even flinching. I mean, sometimes we have to take pause because we're both so crazy in different ways, but in the end I feel really comfortable just being myself with her, and I think that's a rare and special gift. I hope she feels the same with us! And, it's so awesome to see her so happy with Miguel. =^--^= Even though I know she's sad he won't be around this holiday, I think the fact that they miss each other so much is so sweet and precious that it's something to be treasured anyhow. :) You two are so cute together!! Kawaii!!

And finally, here's how we celebrated! Terinati had to work on the actual holiday, so we opened some of our gifts early, and then we opened the rest with Kyriel when she came over on Christmas!

I almost didn't do the video this year, but then I was looking through all the pictures (they don't capture all of the love shared with us this year, but give a general idea at least of how lucky and thankful we all are), and I figured, "Alright. Let's try it once more!" I'm really proud of this video. It's the best (I think) I've made so far. Unfortunately, that meant it was 10 mgs larger than the rest of my other videos, so hopefully it'll stream alright. :} I can't guarantee it'll be fun to watch for everyone, but I hope you enjoy it!